Yesterday was App4England’s third Women in Apprenticeships Conference. It was also the third time Susanna Lawson, OneFile’s co-founder and CEO, has chaired the event. Every single one of these events is uplifting, moving and inspirational – so we asked Susanna to share her experience as the event chair and an inspirational woman in apprenticeships.

‘What an absolutely incredible day I’ve just had the honour of experiencing as the chair of Lindsay McCurdy’s 3rd Inspirational Women in Apprenticeships conference.

It is difficult to put into words what happened at the Welcome Centre in Coventry – but people were coming up to me at the end saying things like ‘I am buzzing’; ‘it was so inspirational’; ‘the best conference I have ever been to’. It’s not often you hear these kinds of statements at an apprenticeship conference – but this is an event like no other. The energy in the room was powerful, positive and personal to everyone there. These events are affecting, and everyone takes something from them – both men and women. 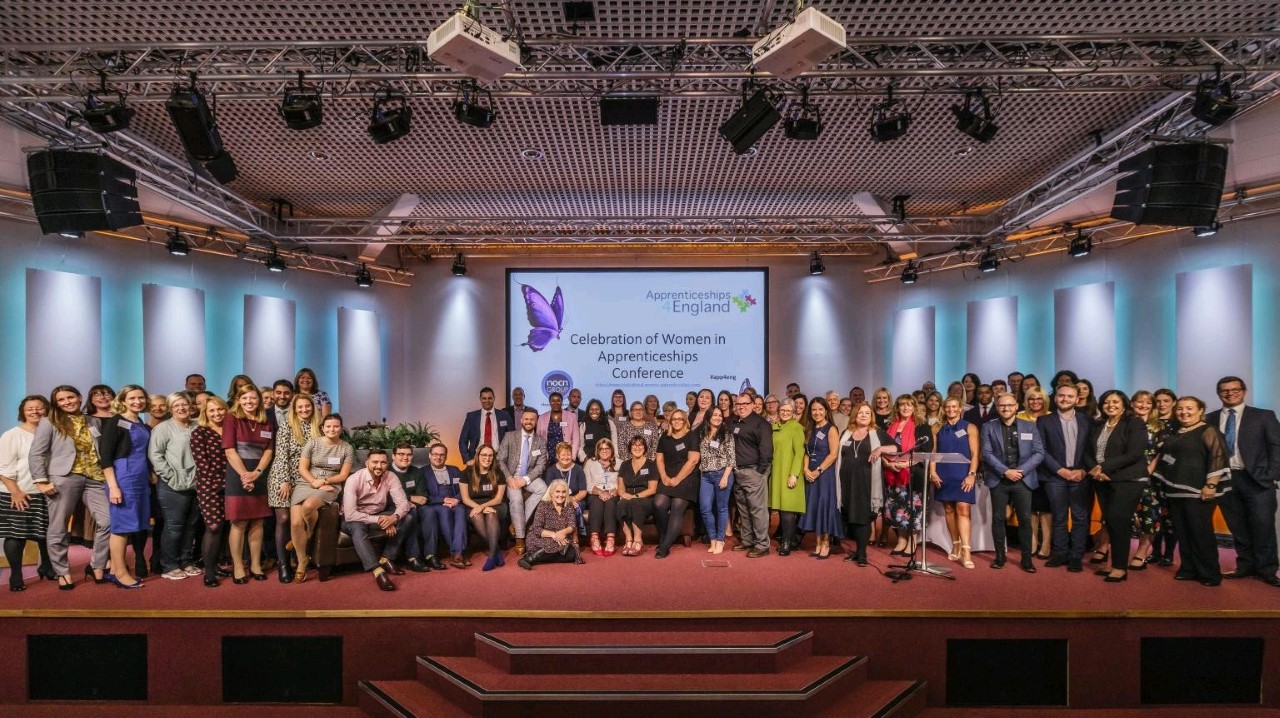 I’ve included the highlights of each speaker, but it still won’t capture the tangible emotions in the room.

First up were headline sponsors, NOCN, who have always been big supporters of these conferences. Fabienne Bailey, MD of Open Awards, part of the NOCN Group, spoke first.

Fabienne started by saying that she didn’t feel very inspirational, which was a theme amongst many of the speakers. Many of the inspirational women at the conference were suffering from Imposter Syndrome. Fabienne explained how boarding school had taught her resilience and empathy. She had strong female role models throughout her life who she had observed and respected. Her mum had a ‘just go for it’ attitude which she tried to replicate in her own life.

Next was Tom Burton, director of apprenticeships for NOCN. How proud he was to work for an organisation which embraced diversity and enabled social mobility shone through. He said he was lucky to be surrounded by amazing women – from teachers at school to his own wife, Rebecca.

Dr Julie Hardman for MMU, who is head of the department responsible for their degree-level apprenticeships in digital and technology solutions, spoke about a subject I am passionate about – diversity in tech. Only 17% of the tech workforce and 10% of leadership positions are held by women. There has been research that demonstrates there is unconscious bias existing in tech. Github allows developers to review and accept each other’s code. A recent research study of 1 million Github users showed that when gender was revealed, women’s code acceptance dropped by 12% compared to if their gender was not declared.

Julie herself has twin girls and when discussing their GCSE options, Julie suggested IT. The girls said that people would think they were weird and their peers would laugh at them. They actually go to an all girls school!

MMU has just graduated their first cohort of degree-level apprentices in digital and technology. Amazingly, 63% of the cohort were women compared to just 13% of the same year’s cohort for the undergraduate degree! This is a phenomenal difference.

Next OneFile customer Total People’s MD took the stage. Linda Dean spoke so eloquently about the lessons she has learnt about the importance of being an authentic leader. She said to not be true to yourself is exhausting.

Her 3 excellent pieces of advice were:

Lucy Ottewell-Key, executive director for Workforce Skills and Partnerships at Grimsby Institute of FE and HE, then took to the stage. She said that teenage angst summed up her youth. She didn’t receive any careers advice and was told she was backwards by a maths teacher.

She is now enrolling on an MBA and believes choices are so important. She said she’s learnt that anxiety is a human condition. You have to believe in yourself and trust what you can achieve. Lucy also spoke about the importance of being the genuine you.

Sharon Blyfield, who is head of early careers for Coca-Cola, spoke at the 1st Women’s conference where she interviewed a panel of her own apprentices. This time Sharon was back to talk about herself. At 7 years old, a primary school teacher told her life wasn’t fair. At such a young age, this teacher was the first person other than her mum that had made her think about life. She remembers it so vividly and strives within her role at Coca-Cola to level the playing field for young people by giving opportunities to people from all walks of life.

Sharon believes her role is responsible for setting her apprentices and other employees off on a journey which inspires them to inspire others. 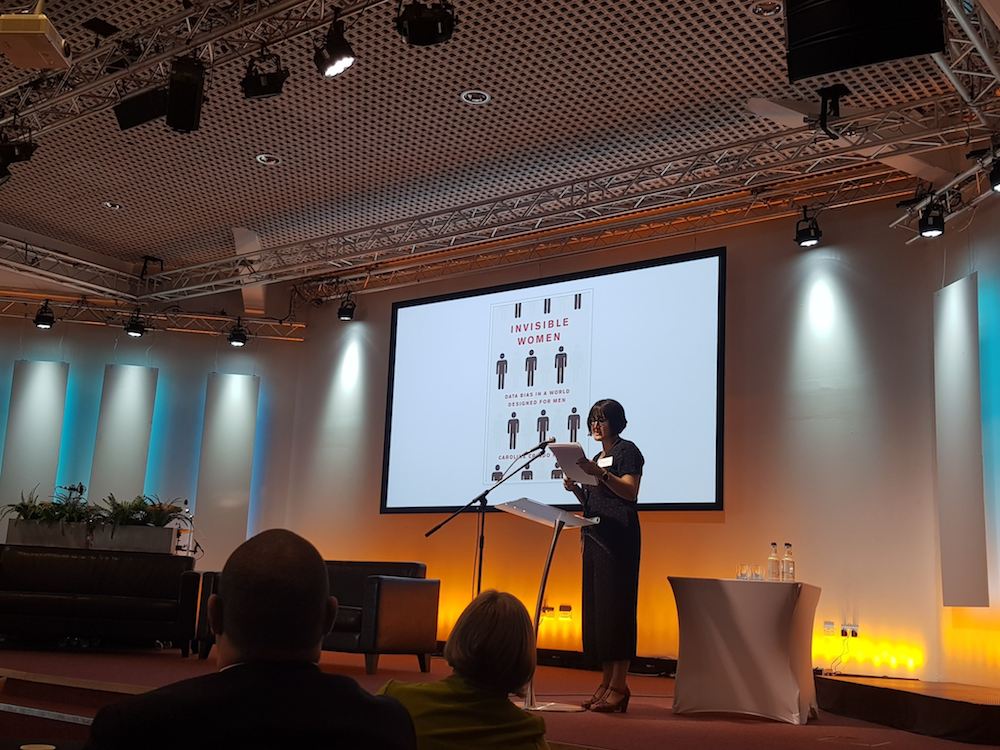 After the coffee break, Jen Longden from Hull College Group described her experience as a woman growing up in Hull. When she called her dad to say she had been asked to speak at the conference, his response was – ‘what the bloody hell have they asked you to do that for? Was Michelle Obama not in Coventry that day!’

She told a story from when she was 13 about how her mum woke her up one Saturday morning telling her she was going to the hairdressers. Jen was very happy to be getting her haircut – but when they arrived, her mum said she would pick her up at 5pm as she had got her a job there! She has never been out of work since.

Jen’s excellent ethos about life is ‘you have to crack on and go out in every weather with a smile on your face’. She ultimately believes the students at Hull college have the same opportunities as anyone else, but they need the right people in front of them.

Next up was Stella Mbubaegbu, the first black, female principal of an FE college. Stella told of the harrowing experience of her family becoming refugees because of the war in Nigeria. They lost everything and she only has 1 photo of herself before the age of 13. It taught her that things are not important – people are. Her mother instilled in her that she could do anything and taught her to walk tall.

She feels privileged to lead the opportunity to provide chances for the young people of Portsmouth as the principal of Highbury College. Stella read a powerful poem called Ithaka which included the quote:

‘Keep Ithaka always in your mind. Arriving there is what you are destined for. But don’t hurry the journey at all’

Emma Shipstone is the director of skills and apprenticeships at Maximus Training. Emma was actually one of the first ever apprentices on the YTS scheme in the 80s. Her dad was very disappointed as he wanted her to go to university – however he now calls her to ask for advice on the apprentices he employs!

Emma showed a powerful video which left many in the audience close to tears.

Harvinder Atwal, the MD for functional skills software BKSB, spoke very honestly about her upbringing and the journey her family had emigrating to the UK in the 1960s. Her dad and uncle were told they had to shave their beards and remove their turbans to work in a factory in Leicester. She told the story of her arranged marriage – how her mother encouraged her to go to university despite others in the family not seeing the point, as once she was married, she wouldn’t be expected to work. Harvinder shared that she had a privileged upbringing and even described herself as a spoilt brat at 17 as her dad gave her whatever she wanted. The first arranged marriage did not happen but the second did. Still married to this day, Harvinder’s husband told her during their honeymoon – ‘I may not be your dad, but I will do my best for you’. Harvinder is now passionate about taking BKSB to India to support maths and English skills over there, as her mum could not read or write.

The final speakers before lunch were Jenny Taylor from IBM and Megan Murray, one of IBM’s degree-level apprentices. Jenny is really proud of IBM’s cohort demographic of 42% women which is much higher than the national average. She said it takes time and effort to recruit to that level of diversity. She is honoured to be able to make an impact because of her position.

Megan Murray, their apprentice, spoke about her experience – she said that balancing a degree and work was challenging but it was a fantastic opportunity. She found the males on the programme were really supportive of the females.

She now goes into schools to encourage more girls into the sector.

Jenny finished before lunch by saying ‘If you see something you don’t think is right, call it out or else things won’t change. Be brave.’

The afternoon session was just as inspiring as the morning – stay tuned to hear the afternoon highlights.