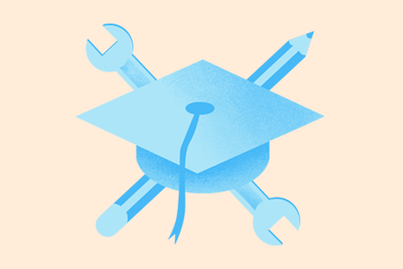 How can schools make the most of their apprenticeship levy?

How can schools make the most of their apprenticeship levy?

Schools and academy trusts aren’t making the most of their apprenticeship levy.

Since the levy was introduced over a year ago, schools across the country have paid £180 million into the kitty, but less than 10% has actually been spent. Many schools don’t know how they can make apprenticeships work for them – and some don’t know they’re paying the levy at all.

So what benefits can apprenticeships bring to schools?

There's a huge range of relevant apprenticeships available – from early years educator apprenticeship to a new postgraduate teaching apprenticeship. It’s a great way to recruit talent as prospective teachers gain hands-on experience of teaching in the classroom as well as formal knowledge learning at college or university – it's the best of both worlds.

The new apprenticeship standards include courses up to level 8 – equivalent to a Bachelor’s or Master’s degree. Schools can spend their levy funds on these high-level programmes to upskill existing staff in all fields.

Apprentices spend 80% of their programme training in school, so they’ll know how the school operates from day one. It also means trainees will be reliable, trustworthy and well-suited to your pupils by the time they qualify – they have the personal touch you don’t get with teaching graduates.

Save money on training

Rather than let their levy go to waste, schools can use their levy funds to pay for training. The levy funds are sat waiting to be spent and apprenticeships are an effective way to recruit, train and retain talent, so it’s a no-brainer really.

All public sector bodies with more than 250 staff must meet public-sector targets of 2.3% apprenticeship starts each year. A school with 300 employees would have to hire 7 apprentices a year, so it’s not a huge undertaking, but is new to many schools.

Use it or lose it

The funds schools pay into the apprenticeship levy will only stay in their NAS accounts for 24 months – after that they’ll be allocated to SMEs. Levy funds will start leaving schools’ accounts in April 2019, so they’ve got to get a move on!

Apprenticeships have been used to upskill the UK workforce for decades – now it’s time for schools to follow suit. And there’s never been a better time to invest in apprenticeships. Schools have millions of pounds sat in their levy funds ready to spend on apprenticeships.

To find out how you can make the most of your apprenticeship levy, download our free guide.