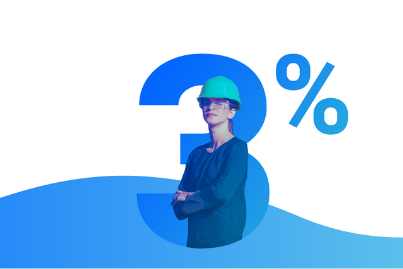 Women make up 3% of all engineering apprentices, which is a problem for the industry.

There’s a huge gender in balance in engineering apprenticeships.

Women make up just 3% of all engineering apprentices – which is a huge problem for an industry that’s crying out for skilled workers. If engineering companies could attract more females to their workforce, they’d be tapping into a huge talent pool.

Part of the issue stems from a perception problem. Engineering has been a male-driven industry for so long that girls are often discouraged from pursuing it as a career – either by parents, teachers or siblings. This means companies have to work even harder to overcome these stereotypes and attract women to their business.

One company that’s leading the way is Coca-Cola. We met 3 of their engineering apprentices – Kerry Morgan-Smith, Kody Gledhill and Sophie Paveling – and asked them about their journeys into engineering.

‘My dad’s an engineer and both my brothers did apprenticeships, but they said I couldn’t be an engineer as I was a girl. This just gave me the drive to achieve.’ Kody started at Coca-Cola as an apprentice engineer and is now in the final year of her programme. She was the only female on site and most of the men were much older than her – but instead of feeling intimidated, but Kody saw this as an opportunity to learn from experienced colleagues. ‘With an apprenticeship, you learn the theory at college but can get back to site and put that into practice. I would 100% encourage school leavers to consider an apprenticeship and would love to see more girls and women in STEM careers like myself.’

Sophie also followed in her family’s footsteps and started her career as mechanic. She soon wanted to be challenged more and joined Coca-Cola as a mechanical engineering apprentice. Since then, she’s progressed into electrical engineering and is now a dual-skilled engineer working on site to solve problems every day. ‘No 2 days are the same. I’ve also moved into programming and am going to do a degree apprenticeship to be a full-time automation engineer. Thanks to Coca-Cola and apprenticeships, I’m achieving my dreams.’

People told Kerry she could never be an engineer as a girl too – but boy, has she proved them wrong. Kerry started at Coca-Cola 22 years ago as an engineering apprentice and has climbed the ranks ever since. She also did a business management apprenticeship which gave her the confidence to lead a team. ‘I knew I could talk their language and have worked up from junior manager, to middle management and am now a senior management at Wakefield – the largest Coca-Cola site in the UK. I would recommend apprenticeships to everyone.’

These young women are breaking the stereotype and setting a great example for others. All 3 of them said it’s encouraged women around them to consider engineering too. And that’s exactly what we need to do – be the change we want to see. Engineering companies need to take an active role in encouraging more women to get into engineering though apprenticeships.

To find out what you can do to get more women into apprenticeships, download our checklist.