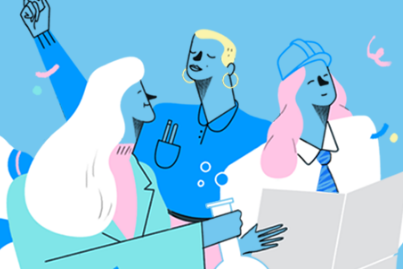 All kinds of people flocked to the first Celebration of Women in apprenticeships.

What do we expect from a women's conference? Flowers, pastel colours and men barred at the door? Well not this women's conference. People of all ages, genders and races flocked to the Welcome Centre in Coventry for App4England's Celebration of women in apprenticeships – the first of its kind. People were prepped for debate, discussions and controversy – and they weren't disappointed.

The conference chair, Susanna Lawson, CEO of OneFile, kicked off the event by sharing her own experiences. She spoke about her lack of confidence in chairing her first event and how she felt like an imposter stood on stage in front of so many inspirational women. But this imposter syndrome is something many women suffer with – feeling like we're not good enough, not confident enough, and not worthy of the position we're in. Susanna said she had to push her boundaries and prove to herself that she can do it – which is something all women need to do. We need to grab the bull by the horns and show ourselves and others what we can do and the impact we can all have on the future of apprenticeships.

This set the tone for the rest of the conference.

The first session was a call to arms for more female apprentices in construction, manufacturing and engineering. Petra Wilton from CMI showcased some sobering stats about the glass pyramid in leadership and management. Women are 40% less likely to be promoted than men, and the number of female directors in the FTSE250 has dropped from 7.7% last year to 6.4% – nowhere near the 50/50 split we all dream of.

Caroline Roberts from City & Guilds then spoke about the opposite end of the spectrum in construction. Construction companies struggle to recruit young people and women – partly because of an image problem. There's a perception that construction is all about 'sweaty bottomed builders', but that's simply not the case. It's all about highly skilled roles – like logistics, digital design and on-site assembly.

Caroline Gumble, COO of EEF, had the same view. She said we need to do more to change this perception and develop homegrown talent. With Brexit on the horizon and uncertainty for skilled European workers, we need to double the number of engineering apprentices and graduates to keep up with demand – and women can play a huge part in this. It was an extremely passionate discussion, and we broke for tea and cake with plenty to talk about.

Session 2 started with some light stretching. Jenny Garrett took to the stage to explain how important mindset is – your self confidence can take you further, but limiting thoughts can also hold you back. To demonstrate, Jenny had us up on our feet, stretching our arm to the right as far as it could go. We then closed our eyes, imagined ourselves stretching even further, and then tried again. We all gasped as our arms stretched round much further than before! Jenny said it’s all about visualising achievement – it's what athletes do to give them the edge.

Next up was Arit Eminue – the founder and director of DiVA. She had a hard act to follow, but totally blew us away. She spoke about diversity, joking that, as a black woman, she was always welcomed into businesses as it upped their staff diversity. She also introduced us to Rent-a-Minority – a spoof website posing to help employers meet their diversity quotas. It's worth a look as it's so ridiculous, but Arit explained that the site actually had thousands of hits in the first week, hundreds of applications, and real enquiries from real companies. We all laughed along, but Arit was exposing a huge problem in business today – quotas. Arit was funny, endearing and absolutely on point.

Next was Angela Middleton from Middleton Murray who had our blood pumping as she explained the benefits of health and fitness – how it's affected her personal life, staff retention and business performance.

Then it was time for Jane Knight from Successful Mums. She works with mums who are struggling to get back into work after maternity leave. She said that even women who left leadership roles have ended up working nights in supermarkets just to fit work around family life. Jane supports mums in their journey back to work, helping with job searches, interviews and CV writing. After having a baby, most women just write 'career break' on their CV, but Jane explained how so many parenting skills are transferrable to the workplace – like negotiating, problem solving, resilience and working under pressure. All these things give women the confidence they need to go back to work – it changes their perspective.

Susanna then joined Jane on stage to present their research project about returning mums. Their survey showed that things are on the up, but a lack of support is still affecting returners' performance and engagement at work. Susanna told us some shocking stories that came out in the report – including women being told by their employers to get a termination. There were gasps around the room and it really highlighted that way more still needs to be done.

After a quick Q&A, Louise Campton from Primary Goal told her heartfelt story. She spoke eloquently about her struggle with loss, depression and how she overcame everything to become the successful mum and business woman she is today. It was a really emotional moment and something you don't usually see at a male-driven conference – people talking about their biggest vulnerabilities and how sometimes these weaknesses become your strengths.

Susanna then welcomed Sharon Blyfield from Coca-Cola to the stage, along with three of her female engineering apprentices – Kerry, Kody and Sophie. All three women were told they couldn’t be engineers when they were younger as they were girls. But instead of taking no for an answer, this gave them the drive they needed to succeed – and they've never looked back.

Another highlight was Janet Glentworth from Creative Support and her apprentice Sona Peskin – the first apprentice in the UK to complete the adult care work apprenticeship standard. Janet spoke passionately about the workers who look after the most vulnerable people in our society, and that people like Sona should be celebrated too. Hear, hear Janet!

In the final session, Fiona Hudson-Kelly, Smart Apprentices, told her dramatic story – how she made it from an unstable family home to become a successful entrepreneur. We then welcomed Karen Woodward (ESFA) and Susan Pembler (HOLEX). They spoke about a big topic at the moment – the gender pay gap. Female apprentices are paid £1 an hour less than male apprentices – but apprentices as a whole are chronically under paid. Some parents from disadvantaged backgrounds can’t afford for their children to do apprenticeships as their wages contribute to the household income and could impact their benefits.

Laura-Jane Rawlings from Young Employment UK agreed. Apprentices have to pay for transport, equipment, uniforms – even buying one suit is a struggle on such a low wage. Some young people can make more money selling drugs than doing an apprenticeship, so things need to change.

The penultimate slot was Louise Doyle – the co-founder and director of Mesma. She went back to basics and showed us how important speaking to young people about their opportunities is. People as young as 6 know what apprenticeships are, but they have a perception that they're 'what you do if you're not good enough for sixth form' – which is pretty shocking. Young people have got this perception from somewhere, so we need to reeducate parents and teachers so they cast a positive light on apprenticeships.

Last but not least, Claire McKelvy gave us a quick round-up of the event. By this time, everyone was full of love, positivity and pride, feeling inspired by the stories we'd heard and the difference we can go on to make for our daughters, granddaughters and the future of female apprenticeships.

Find out how to get more women into apprenticeships here.